Projects for the TiVo®

These require Python 2.x, unless otherwise noted. (macOS and Linux users should already be set.) All except Reversi are open source, with code repositories available on GitHub. Most of these projects originated in TiVo Community Forum threads, where they were first distributed as attachments, so I’ve linked to those threads as well.

Please note that I’m not an employee of TiVo Inc., and these aren’t TiVo products. 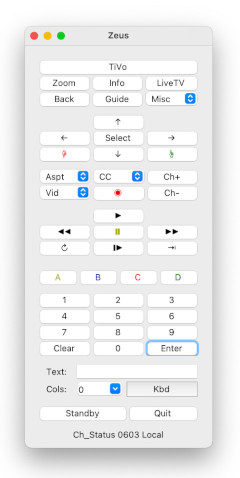 A GUI, network-based virtual TiVo remote control for your computer, for Series 3 and up. Unlike the full-featured iOS and Android apps provided by TiVo Inc., this program merely simulates the functions of the hand-held “peanut” remote. But it will run on your laptop, desktop PC, or even your old PDA; and it depends only on the local network, not an Internet connection.

Controllable TiVos on your network are detected automatically, when possible; or you can specify an address.

Shortcut keys are available for most operations. Direct text input is available for those parts of the TiVo interface that support it, and for those that don’t, the Network Remote can navigate the “Ouija board” and enter text automatically. Closed captions can be toggled with a single button press. These features make the Network Remote faster in use than an infrared hand-held.

Tested on Windows, macOS, Linux, and other platforms. The GUI works with either Tkinter or GTK, at your option (and depending on what’s available).

This app is compatible with Python 3. (The macOS app includes the interpreter.)

Although the “Crestron” interface used here is now officially (though incompletely) documented, I developed this program based on discoveries by TCF user Omikron (see the thread, below).

An intermediary between the TiVo and remote control apps (“Crestron” interface only) that allows multiple clients to connect at once; it can also monitor the traffic on the console.

While the Network Remote and Remote Proxy include features to support each other, Remote Proxy will work with any (old-style) TiVo remote app.

This program is compatible with Python 3.

An alternative to TiVo Desktop Plus, pyTivo is an HMO (Home Media Option) server, that can transfer video to and from the TiVo (Series 2 or later), and previously could also provide music and photos to the TiVo. With the help of FFmpeg, it can transcode videos from a wide variety of sources to a TiVo-compatible format, on the fly.

Despite the similar names, HMO is unrelated to the later HME (q.v., below), and has survived better; but it, too, has been increasingly crippled over the years. pyTivo’s main function – transferring video to the TiVo – doesn’t work in the latest TiVo UI (which means it can never work on the TiVo Edge). “Push” transfers, to the TiVo but initiated from the pyTivo side, have been completely broken for some time, along with photos and music. Transfers from the TiVo still work, for now.

pyTivo was created by Jason Michalski, and over the years has incorporated the work of many collaborators. I only maintain one fork.

tivodecode-ng (“ng” for “next generation”) is a portable command-line tool for decrypting .TiVo video files into program streams or transport streams, depending on the source. It also will decrypt the metadata (title, description, etc.). It’s based on tivodecode by Jeremy Drake, with enhancements by several contributors. tivodecode-ng adds support for transport streams, although that’s a work in progress. (Note that support for program streams is as complete as ever.)

tivodecode-ng is written in C++ (no Python dependencies).

No longer functional due to changes made by TiVo, this code is here for reference. These depend on the old “Home Media Extensions” (“HME”) interface.

An alternative to TiVo’s Java-based HME SDK, this package helped you to develop HME applications in Python. Note that doing so nowadays is a quixotic undertaking, which I can no longer recommend.

LGPL 2.1+, except where noted. (Most of the example apps are ported from TiVo’s SDK, and as such are under the Common Public License.) More of a framework than a library. Python 2.x only, where x >= 3.

HME for Python included some features not available in publicly released versions of the Java SDK, such as (with Series 3 or later TiVos) an easy method of changing resolutions between SD and HD, and support for direct text input.

Besides HME/VLC and Reversi, HME for Python was also used in Jeff Bernardis’ “Jukebox” and “pyTivo Video Manager”. 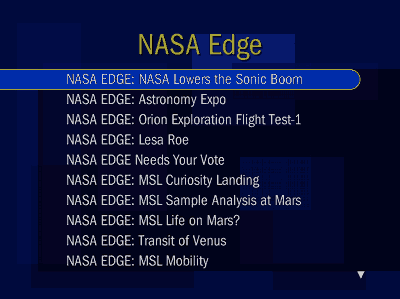 The first third-party HME app to take advantage of the undocumented video streaming capability found in Series 3 and later TiVos, as seen for example in the YouTube viewer. Surpassed in some respects by Streambaby, but where Streambaby only handled locally-hosted files, HME/VLC also supported live Internet streams, and video podcast RSS feeds.

In addition to Python, as the name suggests, HME/VLC depended on VLC Media Player to transcode files and streams that weren’t already in a TiVo-compatible format. Starting this project after having worked on pyTivo, I wanted something that would be easier for end-users to set up than FFmpeg. VLC also offered a built-in streaming capability of its own. But the results were mixed, with subsequent versions of VLC breaking required features, and then only partially restoring them.

Many of the streams have been discontinued since the last release of HME/VLC, with no replacements available. 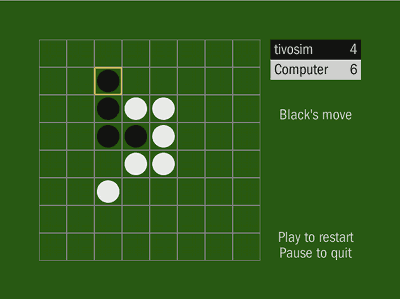 The classic board game – you could play against the computer, or against another human player, if one was online. Written using HME for Python, this was technically the first HD-capable game for TiVo (although the graphics were plain).

The routine that determined the set of legal moves was adapted from Brent Burley’s Reversi.py, and the computer’s strategy from Mark Williams’ “Positional” strategy for the same program. Some ideas were drawn from the now-extinct PlayTeeVee version of Reversi for the TiVo. (I chose the strategy for its low computational overhead rather than its strength; it was, however, a slightly stronger player than PlayTeeVee’s was.)

Reversi ran for nearly a decade, eventually becoming unavailable to new TiVos when their “Add an App” feature was broken, and finally shut down when I lost my old static IP. (Adding apps had relied on IPs rather than domain names, presumably for ease of entry via the remote, but complicating hosting.)